BURGUM: ND CAN WEATHER THE STORM
State continues to see worst COVID-19 outbreak in US 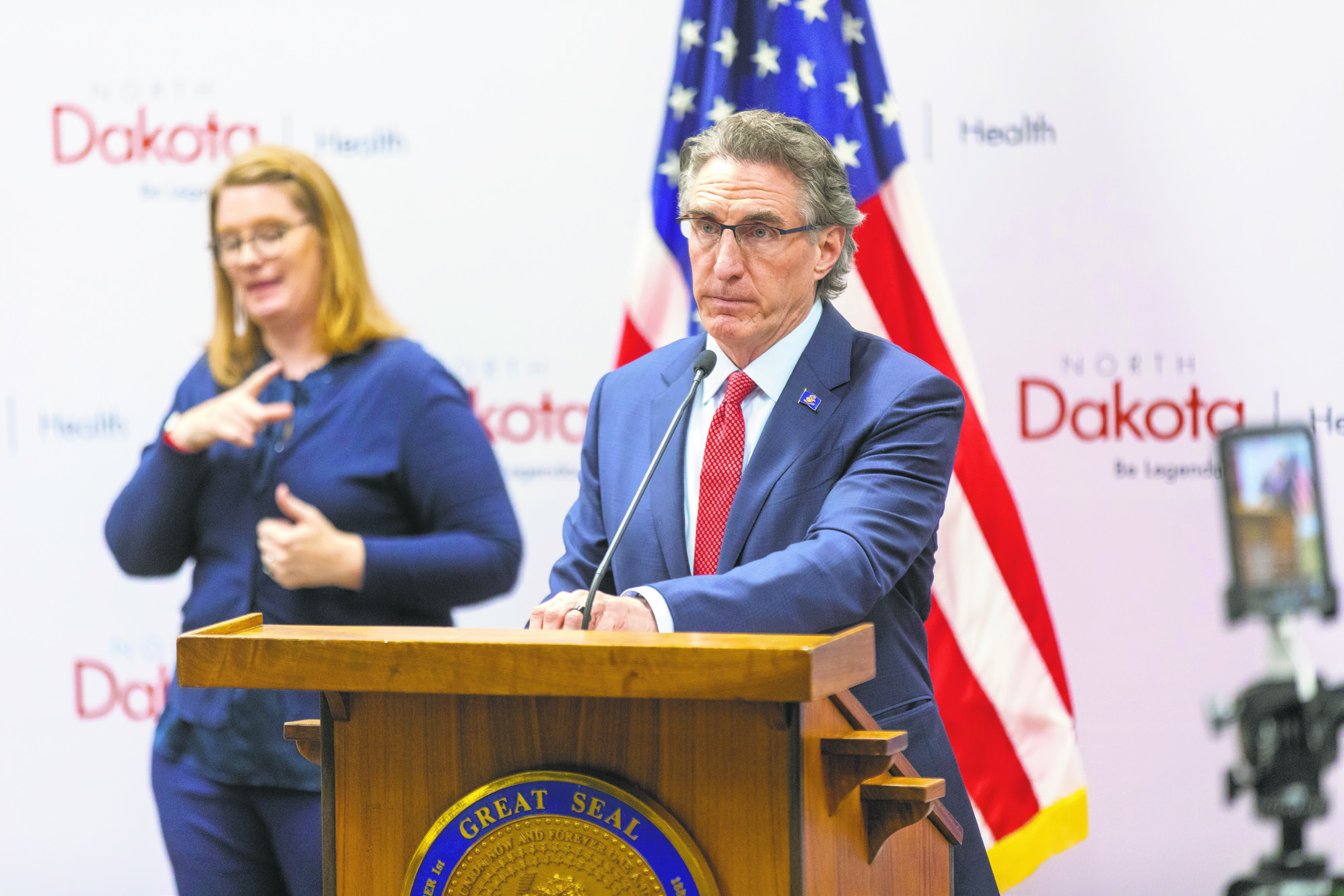 Gov. Doug Burgum spoke at a news conference on Friday, Oct. 23, and praised North Dakotans for continuing to remain vigilant and doing their part to curb COVID-19 spread in the state.
Kyle Martin / Special to Forum News Service
PREVIOUS IMAGE


Bismarck
Gov. Doug Burgum on Friday, Oct. 23, praised North Dakota’s response to the coronavirus — even though the state is currently experiencing the worst COVID-19 outbreak in the United States.

Burgum said he had held 77 COVID- 19 news conferences up to this point, the majority of which he has highlighted North Dakota’s success over the rapidly spreading virus and residents enacting individual responsibility to protect others from the virus.

However, throughout the now seven months of his positive messaging, COVID-19 cases and the number of North Dakotans who have died has significantly increased.

The Republican governor said national media outlets paint the state in a bad light, as North Dakota has a very small population, conducts rigorous testing and is reporting numbers that are “substantially better” than its neighboring states.

“I still have a lot of belief in North Dakotans that we’re going to figure out a way to get through this with a light touch of government and strong knowledge and understanding of how transmission works and how people can take steps to avoid that,”

North Dakota has the most cases per capita with 708 cases per 100,000 people in the last seven days, according to The New York Times.

Friday’s press conference brought little new information as Burgum again highlighted the importance of letting local communities decide how to take action against COVID- 19 and how he was not convinced increased government intervention would help bring down cases.

“There’s plenty of data that could show in states with mask mandates are also having record cases and record deaths,”

Burgum said. “If someone can show me the correlation between the mandate and their performance, that would be a good thing to see.”

Cities throughout the state, including Fargo, Minot and New Town, are enacting citywide mask mandates, which Burgum said he supports if local officials think it is the best thing for their community.

Burgum said less than 10% of the state’s hospitalizations were from COVID-19, and although hospital capacity remains tight throughout the state, he is confident the state can handle the COVID-19 hospitalizations on top of the hospital’s day-today operations.

Of the state’s 46 hospitals, only 14 staffed intensive care beds and 232 staffed in-patient beds were available statewide as of Thursday, Oct. 22, according to the state.

Burgum announced Friday that the state would stop announcing whether those who died with COVID-19 had underlying health conditions after receiving feedback from some health officials that the state is trying to downplay the seriousness of the disease.

The K-12 school dashboard for COVID- 19 is “another layer of transparency that constituents, whether they’re parents or the school boards, can help navigate the complexity of trying to get 120,000 students in their different learning environments in North Dakota all back to a school environment safely.”

The North Dakota Emergency Commission voted Friday, Oct. 23, in favor of reallocating more than $221 million in federal coronavirus stimulus funds to more than a dozen different state agencies, including $16 million in oil industry fracking grants Last week, Burgum moved 16 counties into “high risk,” though no county was moved up on Friday. Burgum said it was important to give counties time to adjust to their new designation and implement mitigation strategies that work in the local community.

Record high active cases Friday Now that the state is closing in on seven months living with the COVID-19 pandemic, some North Dakotans are losing confidence in simply encouraging citizens to take precautions.

Bismarck-Burleigh Public Health Director Renae Moch said earlier this week she has done everything in her power as a local public health expert to encourage people to wear masks, social distance and regularly wash their hands.

“I have all the tools in my toolbox for public health all on the table,”

20. “I’ve done the public education. I’ve talked to people, (and) trying to get people to do the right thing is not working.”

Some of North Dakota’s rural counties do not have hospitals, and many that do are transferring patients out of state as demand for hospital resources has increased and North Dakota’s hospital capacity remains startlingly low.

An additional nine deaths were reported on Friday, Oct. 23, including four residents of Stark County and one each from Burleigh, Cass, Morton, Rolette and Ward counties. All were in their 60s to 90s and had underlying health conditions.

The U.S. Centers for Disease Control and Prevention says older adults and people with HIV, diabetes, asthma, liver disease or other conditions that compromise one’s immune system are at a greater risk of serious illness or death from COVID-19.

The state’s total COVID-19 death toll is now 440, of which 169 deaths have occurred in October alone, according to the state.

At least 258 of the state’s deaths have come in nursing homes and other long-term care facilities, many of which have seen skyrocketing cases among residents and employees in the last month.

North Dakota reported the most COVID-19 cases and deaths per capita in the nation over the last week, according to The New York Times.

Cass County now has 1,347 residents known to be infected with the illness — the most of the state’s 53 counties. It announced an additional 156 cases Friday.

North Dakota does not report a seven day rolling average for positivity rate, but Forum News Service calculated the rate to be 11% for all residents tested and about 19% for tests taken on previously untested residents.