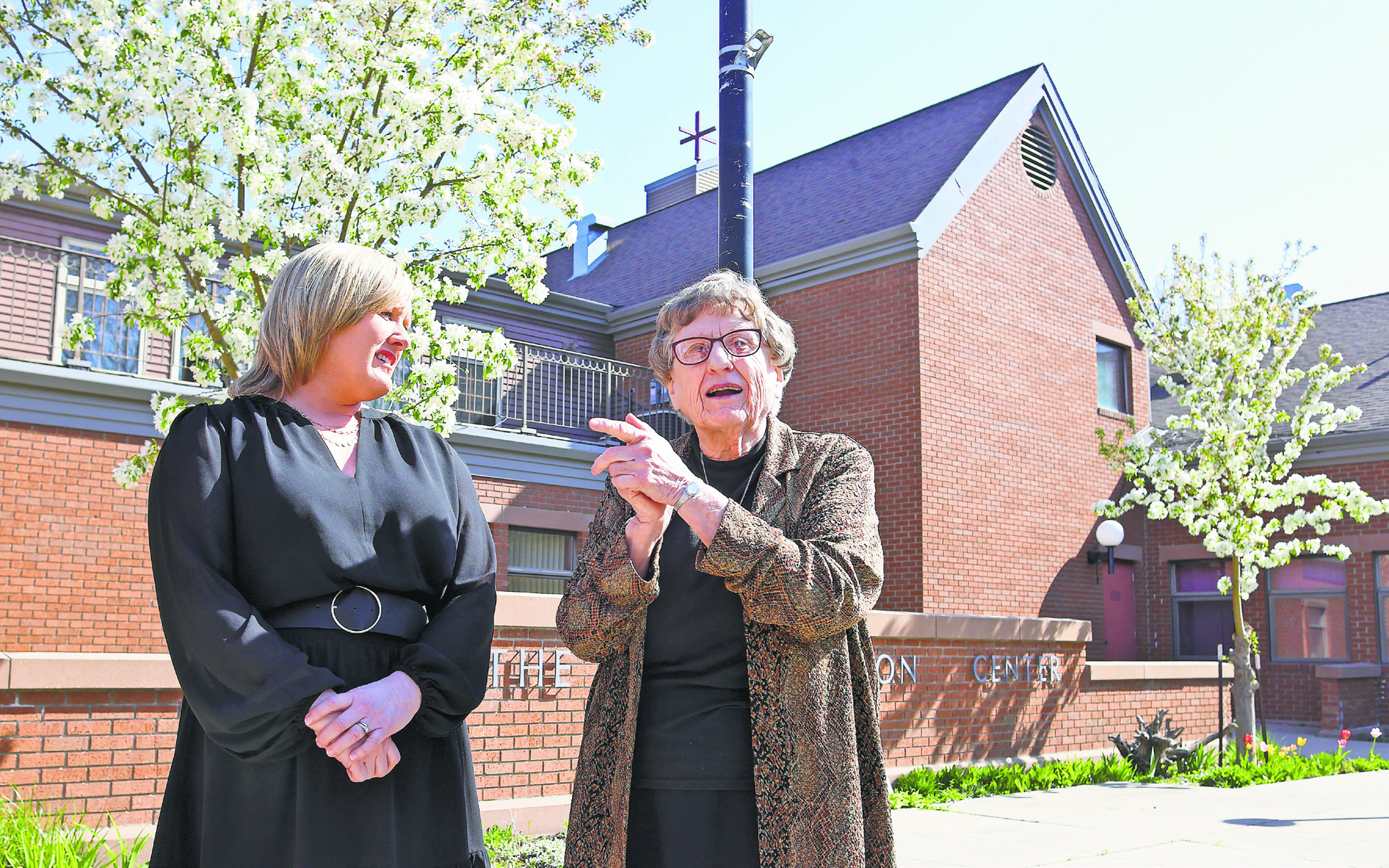 Michael Vosburg / Forum Photo Editor YWCA Executive Director Erin Prochnow, left, and Sister Mary Margaret Mooney of the Sisters of the Presentation meet Wednesday, May 12, at the Presentation Center in Fargo. The two organizations have a long-standing relationship that continues with the YWCA’s conversion of the center into apartments.
PREVIOUS IMAGE

YWCA Cass Clay has announced it is in the process of purchasing the former convent building of the Presentation Sisters in south Fargo. Plans call for turning the complex into safe and affordable housing for survivors of domestic abuse.

Erin Prochnow, CEO of YWCA Cass Clay, said the agency is working to secure an estimated $6 million in state and federal grants to renovate the convent complex that saw a major relocation of its resident sisters last fall.

Prochnow said the plan is to create 19 new residential units for survivors of domestic abuse, with the living spaces expected to be ready for families by early 2023.

The remodeled building will be known as Lantern Light.

The convent building was built in 1984 to be home and worship quarters for the Presentation Sisters after downsizing took place at their former home in Riverview Place in south Fargo, which is now an independent living center.

When it recently became clear the Sacred Heart Convent at 1101 32nd Ave. S. was too large for the number of sisters still residing there, many of the sisters relocated to apartments and independent living centers during the fall of 2020. Others live in assisted and skilled care facilities.

With the YWCA Emergency Shelter located directly adjacent to the convent, Prochnow said “a pretty remarkable friendship” developed over the years, as the organizations share a mission of caring for vulnerable people.

In fact, the YWCA’s emergency shelter is located on property once owned by the Presentation Sisters, said Sister Mary Margaret Mooney, who was a big part of helping the order navigate recent changes.

That close relationship between the YWCA and Presentation Sisters was strengthened in the early 2000s, when the convent renovated a cottage and began leasing six living units to the YWCA for transitional housing.

In 2015, space that was no longer being used at the back of the convent building became four YWCA apartments for abuse survivors. Also that year, the Presentation Sisters began leasing to the YWCA six living units in a second cottage on the convent grounds.

The YWCA is buying the convent partly with proceeds from the 2020 sale of the building that was home to the agency’s A Child’s World child care center that closed after two decades due to the COVID-19 pandemic.

Operating costs for Lantern Light will be covered by rent paid by occupants and public housing assistance.

Staffing and support services will be funded by annual investment growth from YWCA’s endowment, which grew significantly last year due to the proceeds from the sale of the child care center, and a $2 million gift from  U.S. philanthropist MacKenzie Scott.

The YWCA also plans to raise an additional $1 million over the next year to ensure the success of Lantern Light.

Scott’s gift is the largest single gift in the history of YWCA Cass Clay.

“This gift was inspiring and truly uplifting,” Prochnow said, adding that the YWCA embraced the donation as a challenge to think boldly about the future.

Prochnow and Sister Mooney said the former convent’s new name — Lantern Light —was inspired by Honora “Nano” Nagle, the foundress of the order of the Presentation Sisters, the official name of which is the Union of Sisters of the Presentation of the Blessed Virgin Mary.

Nagle, who lived in Ireland in the 1700s, was known for her compassion and generosity and was said to carry a lamp through the streets of her Irish town as she visited homes to offer comfort and care, according to Sister Mooney, who added Nagle was also known for establishing schools for children.

“Our primary focus of our foundation was education as a way out of poverty and ignorance, but then the care of women and children was always closely united with that,” Sister Mooney said.

“YWCA will be good stewards of a place that began with Sisters of the Presentation and carries on through their mission,” she said.